A novel combination of two oral drugs can help leukemia patients survive and recover from their disease, a new study shows.

Researchers looked at three years of data of chronic lymphocytic leukemia (CLL), and found patients had a 96 percent survival rate and a 75 percent rate of seeing their cancer disappear after taking the ‘cocktail.’

All patients involved with the trial were older or had genetic indicators marking them as high-risk for leukemia.

The team, from the team from the University of Texas MD Anderson Cancer Center, says further research into drugs like the combination tested in this trial will make it easier for leukemia patients to beat their disease and live healthy lives. 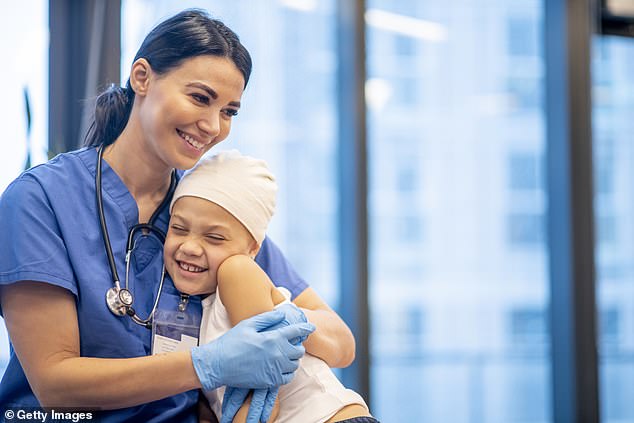 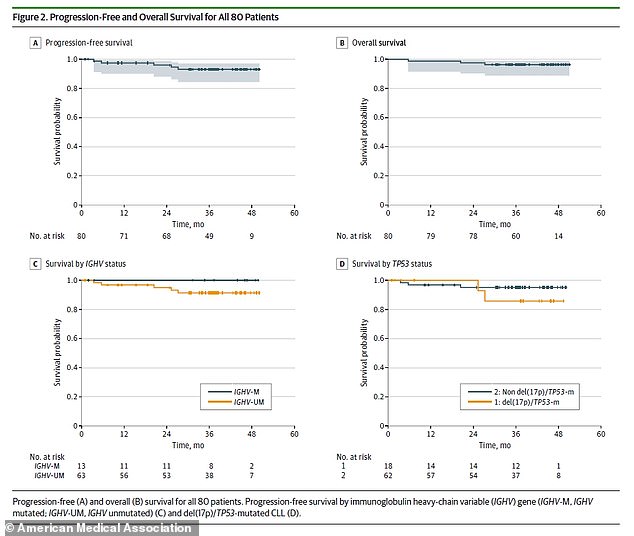 Leukemia is a cancer of the bone marrow, lymphatic system, and other parts of the body that carry blood.

Someone in the U.S. is diagnosed with a blood cancer every three minutes, according to the Leukemia & Lymphoma Society with an estimated 60,000 people diagnosed with leukemia in 2020.

Leukemia and other blood cancers cause about one in ten cancer deaths in the U.S., but the survival rate for this disease has greatly improved in recent decades thanks to research and new treatments.

Chronic lymphocytic leukemia (or CLL) is a type of this disease that’s most common in U.S. adults.

Adults may have CLL developing in their bodies for years without knowing they have it and the survival rate is higher than other forms of leukemia, about 83 percent.

Previous cancer treatment, exposure to certain chemicals, and smoking can also increase the risk of leukemia.

There are several drugs approved for chronic lymphocytic leukemia treatment, including three Bruton tyrosine kinase inhibitors – which stop the blood cells involved in leukemia from multiplying out of control.

In past studies, these drugs have been administered on their own, leading to partial recovery.

But two of these drugs may work better when administered together, according to the study, which was published JAMA Oncology.

After previous research showed that the combination of ibrutinib and venetoclax (two existing leukemia drugs) worked well in a lab setting, they took this treatment to patients.

The trial included 80 patients who hadn’t previously been treated for leukemia. Half of the patients were in a later, more critical disease stage – and the majority had genetic markers predisposing them to leukemia.

Many of the patients were older, about a third were over age 70, and the majority of patients – 94 percent – were white.

The researchers administered the leukemia drug combination for about two years. If patients still had evidence of cancer after those two years, they became eligible for a third year of treatment.

Results from this trial show that the two drugs tested work better together than they do individually.

Three-quarters of the patients in the study achieved cancer remission – meaning the disease had disappeared – within three years of starting treatment.

Almost all patients, 93 percent, survived the trial without any cancer progression and 96 percent survived overall.

None of the patients had their leukemia progress to a later, more severe stage during the trial, though a small number did suffer from other forms of cancer.

Notably, patients with different genetic makeups – including those with predisposed high risk for leukemia – responded well to the drug combination. 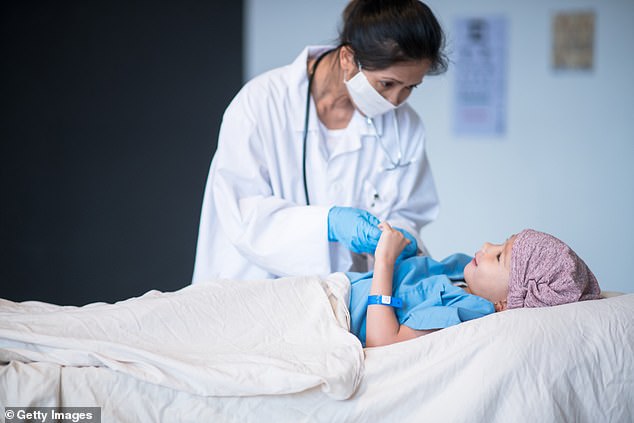 Leukemia patients have much better chances of survival now than they did decades ago, thanks to advances in treatment

‘These long-term results show that two years of oral targeted therapy can achieve lasting disease remission for patients with CLL,’ said Dr Nitin Jain, lead author of the study, in a statement.

‘The majority of patients achieved bone marrow MRD remission and no patients on the trial had CLL disease progression.’

The results from this study are consistent with another study that used the same drug combination.

However, because the trial overwhelmingly looked at white leukemia patients, it may have missed side effects or complications for patients of color.

The need for trial diversity has become an increasing focus for the medical research community in recent years.

Future studies will need to examine how well the drugs work for more diverse patient groups, as well as treatment timing.

The two drugs studied in this trial can confer their own adverse effects if patients are using them for a long time.

‘I think this will be one of several standard of care treatments available for patients with CLL,’ Jain said.

‘There are pros and cons to each of those approaches, and physicians will have to decide which option is best for their patient.’