City-dwellers who live within 1,000ft of a park or play area are happier as experts claim to have proven that green space is good for wellbeing

City-dwellers who live within 984ft (300m) of a park or play area are happier, a study has found.

Researchers from the universities of Newcastle, Warwick and Sheffield, assessed the quality of life of over 25,000 people across London.

The team discovered access to green space influenced a person’s wellbeing more than their job or income.

The scientists claim they have now ‘proven what everyone has always assumed was true’ – that green space is good for wellbeing. 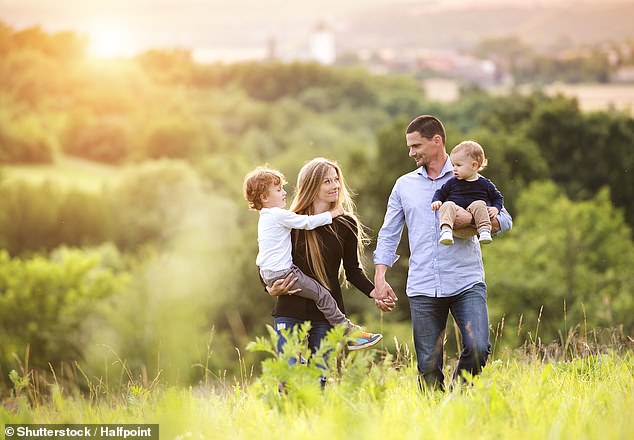 City-dwellers who live within 1,000ft of a park or play area are happier, as experts claim to have proven that green spaces is good for wellbeing. Stock photo

The study, published in the journal Applied Geography, is not the first time nature has been shown to impact a person’s mental health.

But the research now suggests it is proximity that has the effect – not how much green is found near where someone lives.

The UK Government advises that homes are built within 984ft (300m) of a natural environment, such as a park, for physical health.

The study provides evidence that such guidelines can have a meaningful impact on a person’s mental health, too.

But cities can boost happiness just as much as the countryside – as long as they are scenic, according to scientists led by University of Warwick.

Areas with lots of old buildings but not much green space can be just as good for our wellbeing, the researchers said.

The researchers analysed nearly one million ratings of photographs of Britain from an online game called Scenic-Or-Not.

The researchers combined the data with three years of measurements from more than 15,000 users of the iPhone app Mappiness.

Mappiness asks people to report on their happiness multiple times per day while recording their current location, who they are with and what they are currently doing.

Their study found that, although natural elements such as ponds, rivers and forest paths improved ratings on a photograph, so did churches, cottages and towers. And sometimes, big open spaces had negative ratings.

And the effect could be the same regardless of the weather, how wealthy the area is, the activities that take place there and the day of the week.

Lead researcher Chanuki Illushka Seresinhe said: ‘Crucially, we show that it is not only the countryside with which we see this association.

‘Built-up areas, which might comprise characterful buildings or bridges, also have a positive link to happiness.’

Researchers combined survey responses from 25,518 people in London with data on green spaces in relation to where they lived.

This was compared with participants’ mental wellbeing, which were revealed in their survey answers.

Other factors that influence a person’s wellbeing were assessed, such as marital status, education, health and income.

Overall, there was a strong relationship between the amount of green space around a person’s home and their feelings of life satisfaction, happiness and self-worth.

Green space within 984ft (300m) of the home had the greatest influence on mental wellbeing.

For every increase of one hectare of land – about the size of an international Rugby Union pitch – close to residents, their life satisfaction increased by eight per cent.

Their self-worth increase by seven per cent and their happiness by five per cent, on average.

Lead author Dr Victoria Houlden said the study provided the most extensive evidence so far on how green space can improve mental health.

She said: ‘We believe this it is the first study to demonstrate how urban greenspaces may improve a broader definition of mental wellbeing.

‘What makes our work different is the way we consider multi-dimensional mental wellbeing, in terms of happiness, life satisfaction and worth.’

Scott Weich, professor of mental health at the University of Sheffield, said: ‘Up until now the evidence for the link between green space and mental wellbeing has been pretty circumstantial.

‘By combining advanced statistical and mapping methods, we’ve shown that the effect is real and substantial.

‘Basically we’ve proven what everyone has always assumed was true.’

Professor Stephen Jarvis, of the University of Warwick, said: ‘This is the first study to provide concrete evidence of how urban greenspaces may improve mental wellbeing in the broadest sense, and should therefore lead to healthier, happier and more productive urban landscapes in the future.’