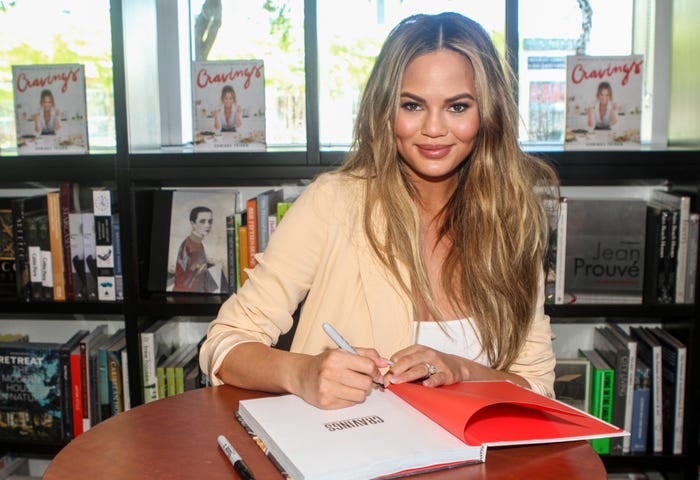 Chrissy Teigen is in the hospital due to excessive bleeding about halfway through her pregnancy, the model, cookbook author, and television personality said in a series of Instagram Stories Sunday.

She's expecting her third child with singer-songwriter John Legend. The couple was suprised to learn she got pregnant naturally since their first two children were conceived through in-vitro fertilization.

Teigen, 34, told followers not to feel sorry for her since she feels good and her son-to-be is still healthy, and requested that medical professionals refrain from giving her advice or trying to diagnose her. "All it does is make me feel really anxious and nervous like I did something wrong," she said.

Extreme bleeding later in pregnancy often occurs when there are problems with the placenta.

In her Instagram Stories, Teigen said she's been on "super serious bed rest" for a few weeks and has been bleeding consistently for a little less than a month.

Her hospital stay was prompted by an even heavier blood flow. It was "like if you were to turn a faucet on low and leave it there," Teigen said, adding that it's been hard to come to terms with since she feels really good.

"It was at the point today where it was just, like, never stopping bleeding. And that's, obviously, very bad," said the mom of Luna, 4, and Miles, 2.

Teigen said her future son is healthy, and growing stronger and moving more and sooner than her other kids, but her severe bleeding is due to a very weak placenta. "Basically, he's the strongest, coolest dude in the sh–tiest house," she said. "So, his house is just falling apart."

Teigen said her placenta was weak to begin with, so "he didn't have the strongest chance at the very, very beginning."

The host of "Lip Sync Battle" said there's not much she can do besides make sure the baby-to-be is surrounded by plenty of fluids and that she's resting as much as possible.

"So yeah, it is scary, but it's scary in a way where there's just nothing to do," she said, urging people not to attempt to give her advice or diagnoses since her medical team is on top of it and knows much more of the story. "We're trying everything we can," she said.

According to the American College of Obstetricians and Gynecologists, severe bleeding later in pregnancy can occur when there's a problem with the placenta.

The placenta is the organ that delivers oxygen and nutrients to the fetus and removes waste. In most pregnancies, the placenta attaches to the side of the uterus and moves with the growing uterine muscle toward the top of the womb as time goes on, allowing the cervix to open for delivery.

Kim Kardashian has said she had placenta accreta when pregnant with her first two children, leading to multiple surgeries and her decision to use a surrogate during subsequent pregnancies.

It's unclear if Teigen has any of these specific complications, but she's been open in the past about the couple's fertility problems that led them to use in-vitro fertilization for their last pregnancies.