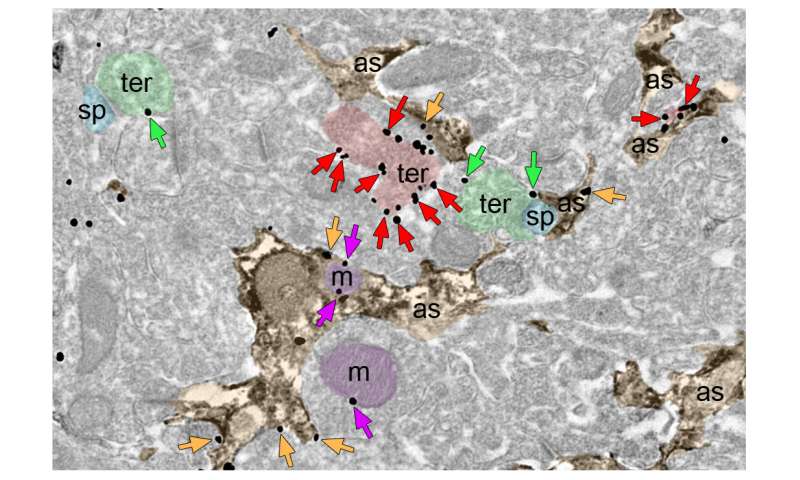 The nervous system comprises neurons and glial cells (glia means ‘glue’). Astrocytes are the most abundant among the glial cells. Among many other functions they undertake to capture glucose from the blood stream to provide energy and allow the necessary neuronal activity to take place, and thus ensure that cognitive functions are performed correctly. Neurons for their part control astrocyte activity by means of molecules present in the astrocytes, which include type 1 (CB1) cannabinoid receptors. However, these receptors, which also modulate communication between the astrocytes and the neurons, constitute the main target of the psychoactive component of cannabis, known as THC (delta-9-tetrahydrocannabinol).

What happens when THC acts on the astrocytes? The research, in which Dr. Pedro Grandes’ group participated, concludes that the activation of CB1 cannabinoid receptors in the mitochondria (cell organelles responsible for producing energy) of mice astrocytes hampers the metabolism of glucose and the production of lactate in the brain; this alters neuronal function and leads to a deterioration in social interaction behaviors. Specifically, according to Dr. Grandes, “The activation of these receptors causes the astrocytes to generate fewer reactive oxygen species, which has a negative effect on glucose production from lactate leading to neuronal stress and a lack of social interaction. What makes this research significant is not only the identification of this deficiency, which can be reversed through genetic and pharmacological manipulation of these molecular and biochemical changes brought about by cannabinoid treatment, but also its contribution to knowledge relating to the changes caused by cannabis in the brain.”