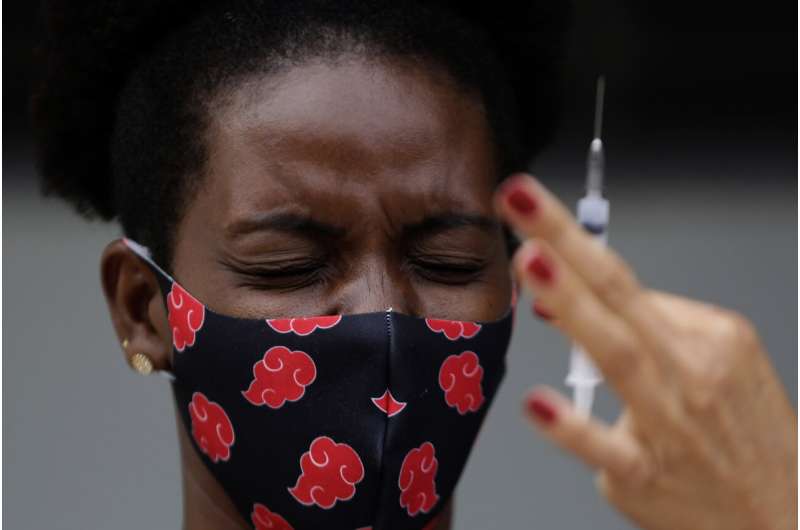 Nurse Rosemeire Bezerra has years of experience inoculating descendants of slaves—known as “quilombolas”—in the municipality of Cavalcante, about 180 miles from Brazil’s capital, Brasilia. Her biggest challenge in the current vaccination drive is keeping vaccine doses below 8 degrees Celsius (46 degrees Fahrenheit) in an isolated, tropical region. It’s especially sweltering in the Valley of Souls (Vão de Almas, in Portuguese) where she was headed.

On Monday, Bezerra protected plastic foam coolers with cardboard shells and filled them with ice. She intended to vaccinate 190 families within four days, before that ice melted. She set off with her team and three others, including an experienced driver familiar with the remote region.

Houses in the Valley of Souls are far apart, and chewed-up dirt roads make for a jolting journey that complicates keeping a cooler balanced on laps. The many river crossings test the four-wheel-drive vehicles, too.

Access is so poor that Bezerra and her staffers often vaccinate people they encounter on the roadside or tending to crops in their fields, as they might not have another chance. Some areas are reached only by foot, and they have to carry in their own food and water. 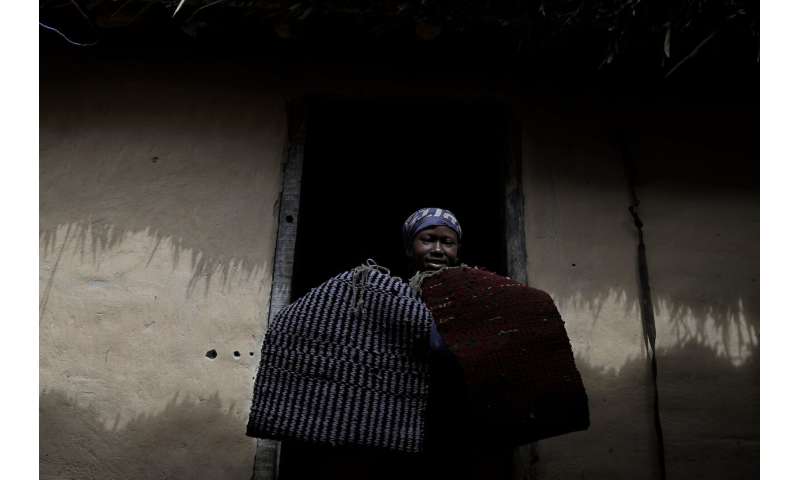 The vaccination team set up shop inside a school and pitched tents inside a classroom. Bezerra slept with a lantern and the coolers by her side.

“I woke up three times every night to see if the temperature was adequate,” she said. “It’s a very big responsibility if they’re lost. I treated those vaccines like my daughter.”

Brazil is in the midst of an alarming spike of COVID-19 cases, with nearly 3,000 deaths a day for the first time since the pandemic began. Public health experts say that restrictions on activity and social distancing can help ease pressure on hospitals’ overloaded intensive care units, but that the only long-term solution is mass vaccination in a country of 210 million people that is bigger than the contiguous U.S.

Almost 6% of Brazilians have received at least one shot, according to Our World in Data, a collaboration between researchers at the University of Oxford and the non-profit group Global Change Data Lab. Just 1.5% have gotten two doses. 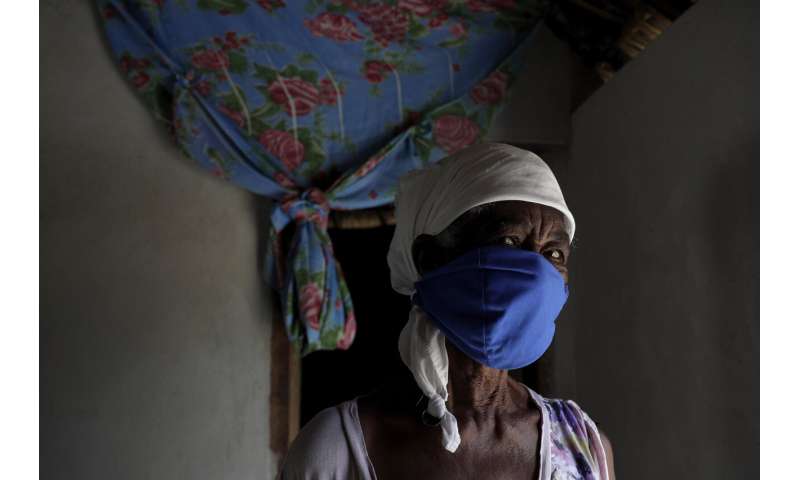 There are formidable logistics to reaching Indigenous communities, many of which are only accessible by boat, and also difficulties overcoming doubts about the vaccines.

Members of the remote Baré group in Amazonas state received their vaccine jabs Wednesday after health workers travelled more than two hours from the state capital of Manaus up the Cuieiras River to the village of New Hope (Nova Esperança). Some of the villagers initially had rejected the shots.

It was hardly the only time Januário Carneiro, coordinator of the Manaus region’s Indigenous health care unit, was met with skepticism and mistrust.

Carneiro has spent hours convincing Indigenous people the vaccines are safe, and says he has been successful. So far, 71% of about 15,000 Indigenous people in the Manaus region have received their first shots, and 52% had their second jabs this week, he said. 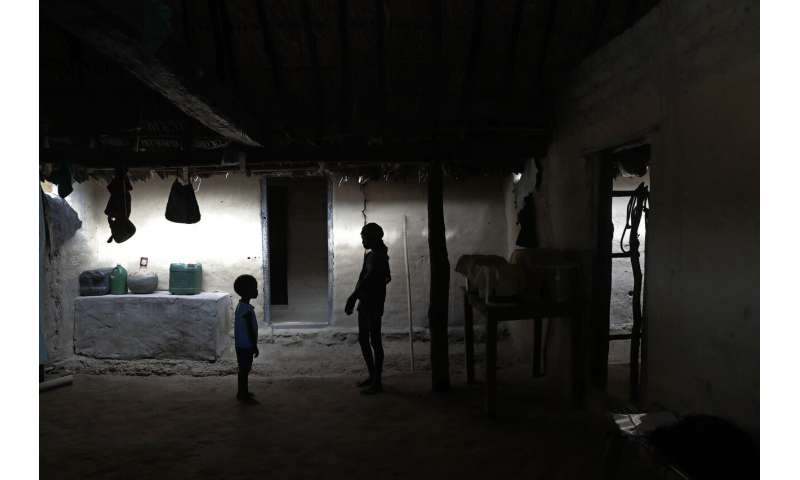 While New Hope is home to 195 villagers, Carneiro’s journey on Wednesday was to immunize just 19 people missed on prior outings. That helps explain why priority vaccination for Indigenous people and quilombolas is a matter of efficiency.

“Imagine if you go to these isolated areas just for people over 70 years old, then have to come back later, paying for all the fuel for a boat just for a small group. That’s why, when you go, you have to vaccinate everyone at once,” Jacqueline Sachett, a nursing professor at the Amazonas state university, said in a video posted by the state-run Fiocruz Institute. “It isn’t just a matter of human rights.”

New Hope’s chief, José Prancácio, said the whole village was infected with the coronavirus after people traveling to Manaus for food brought the virus home. 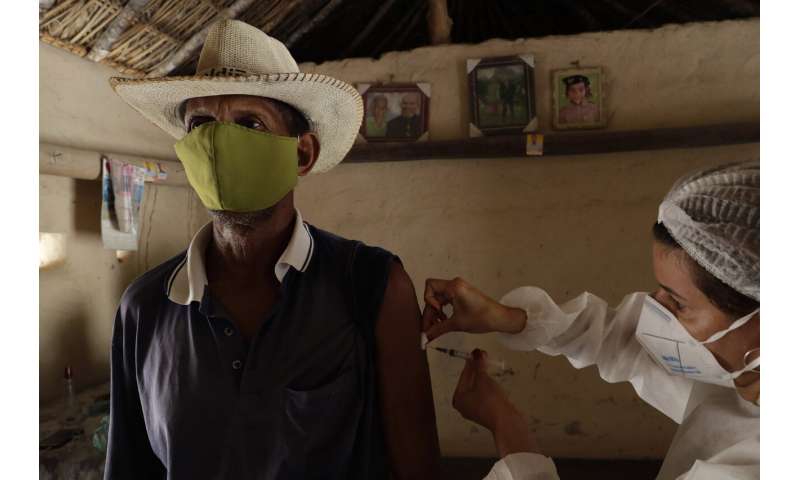 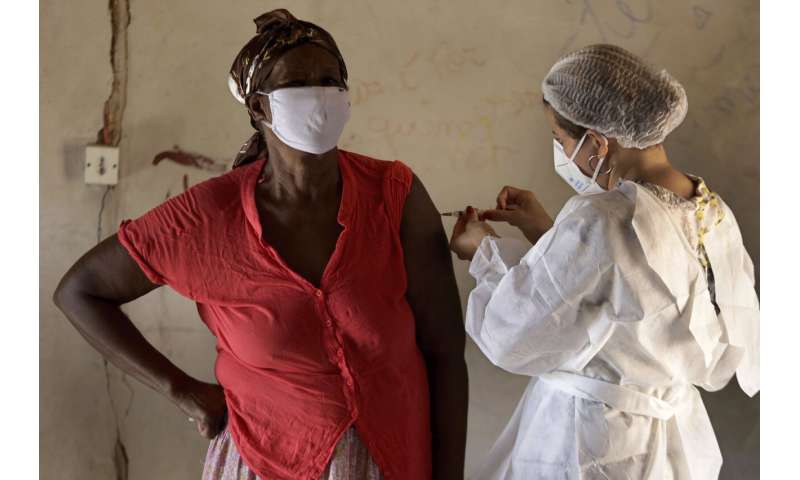 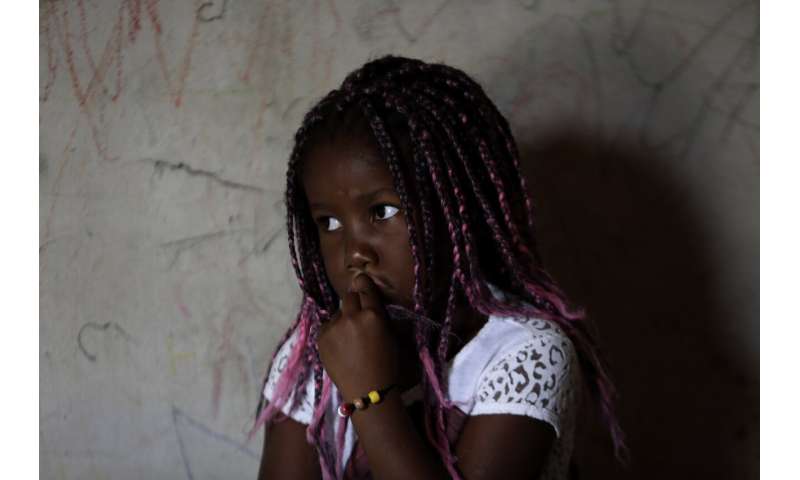 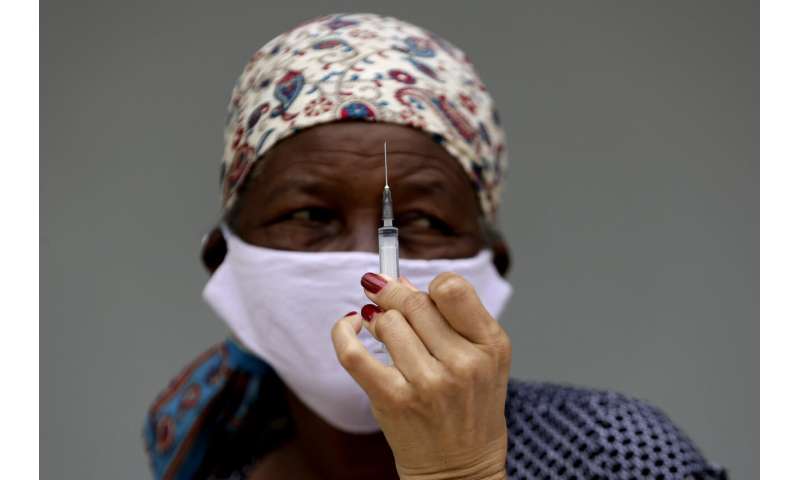 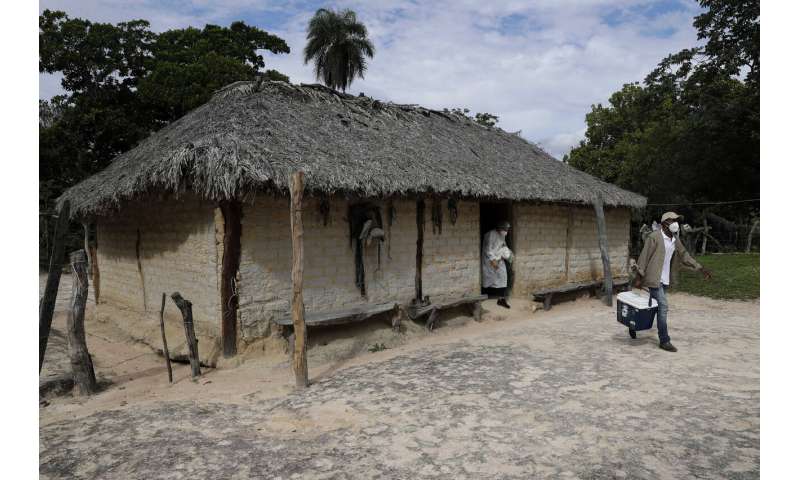 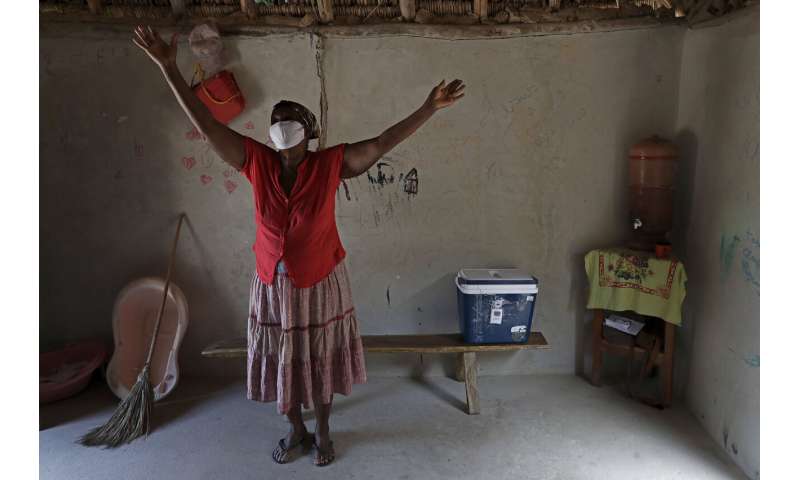 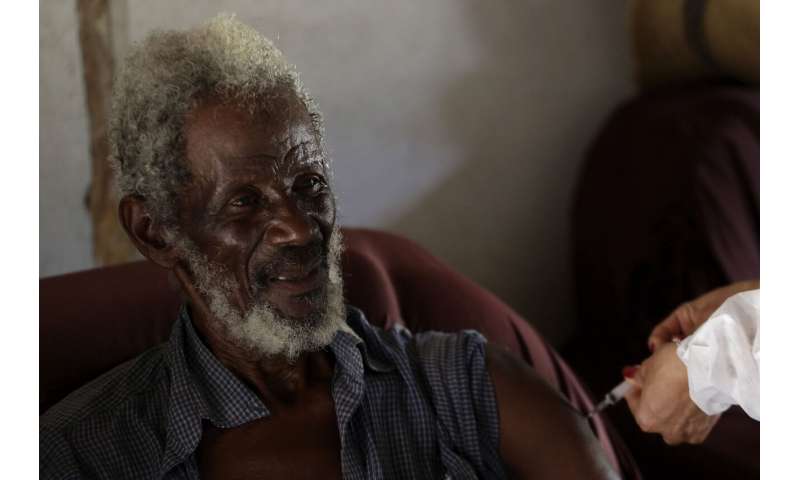 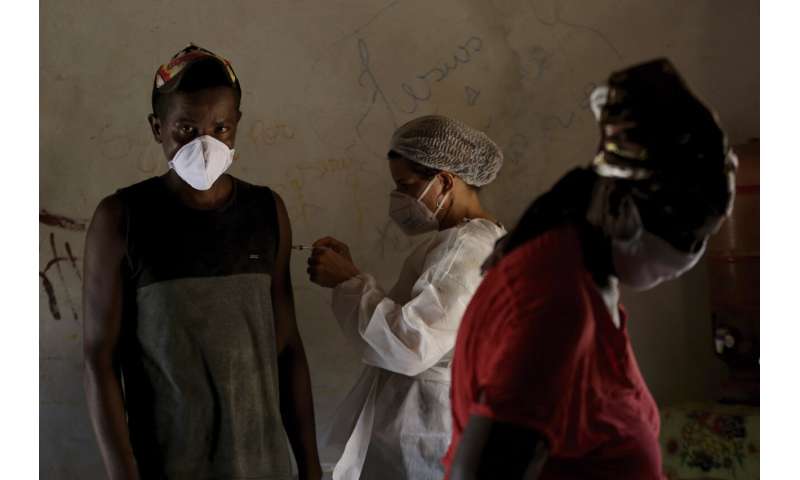 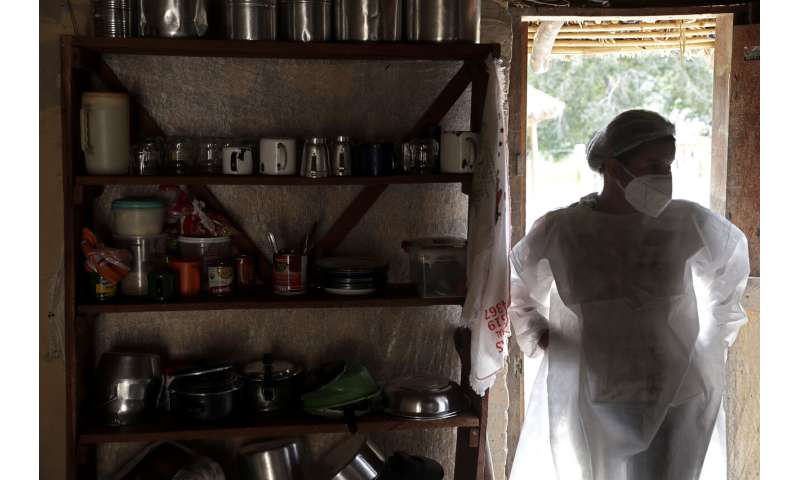 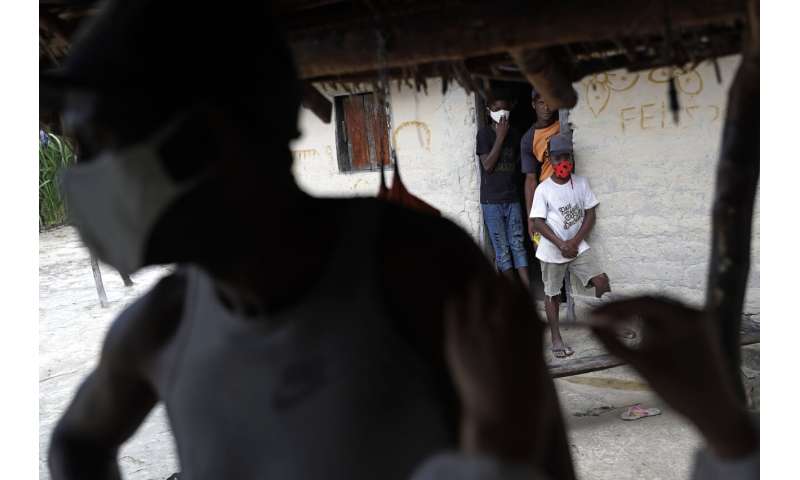 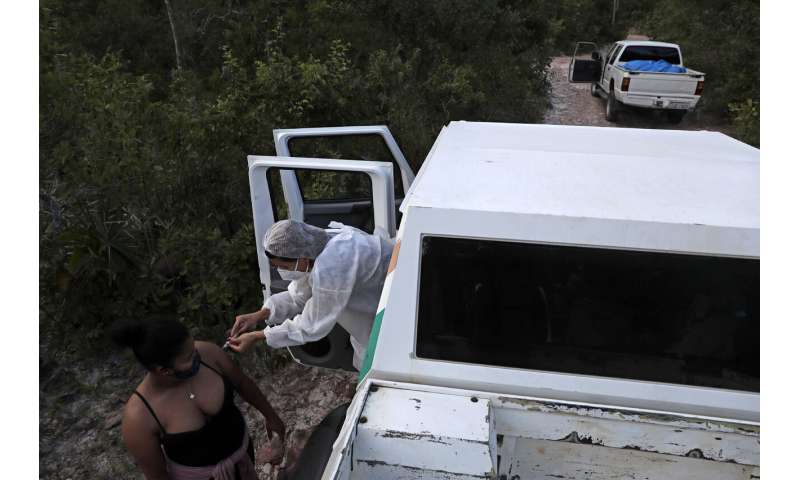 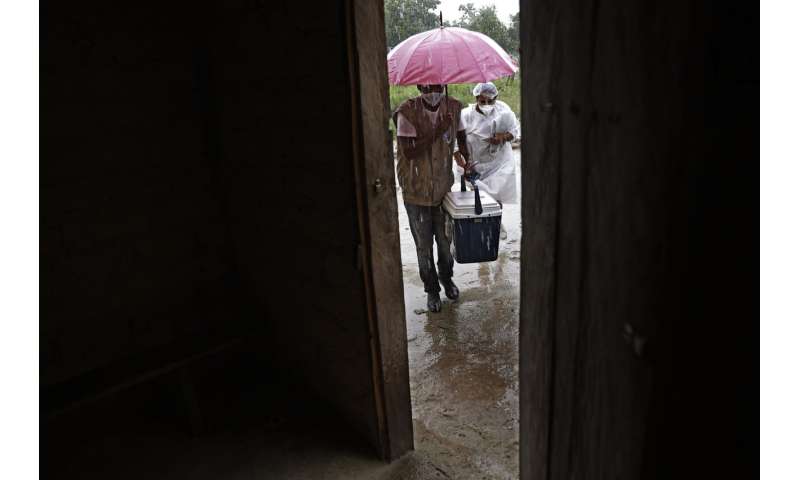 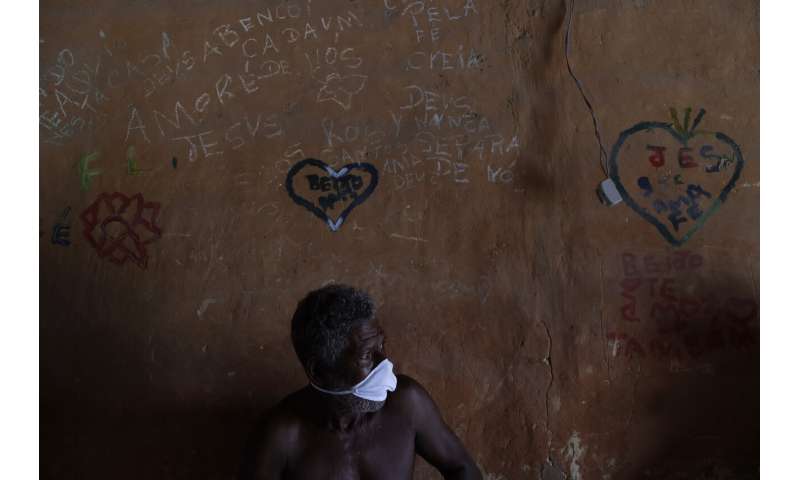 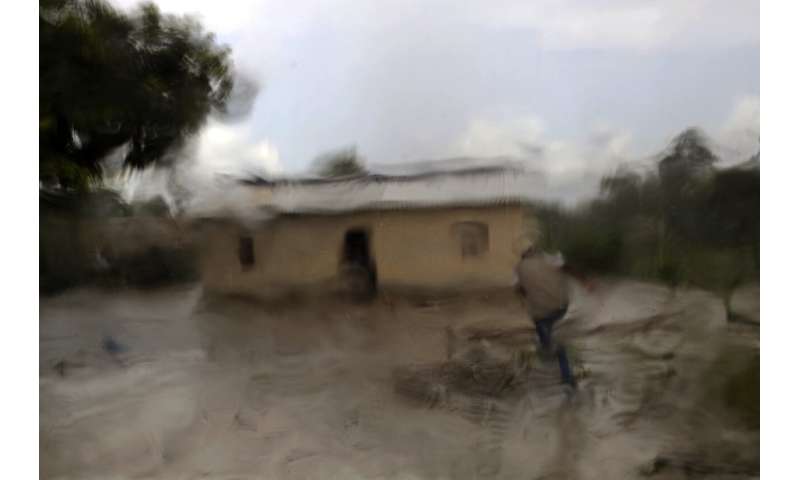 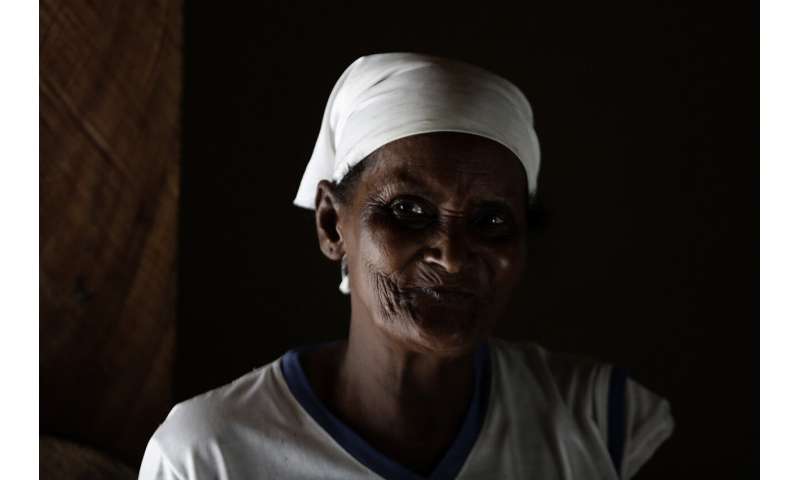 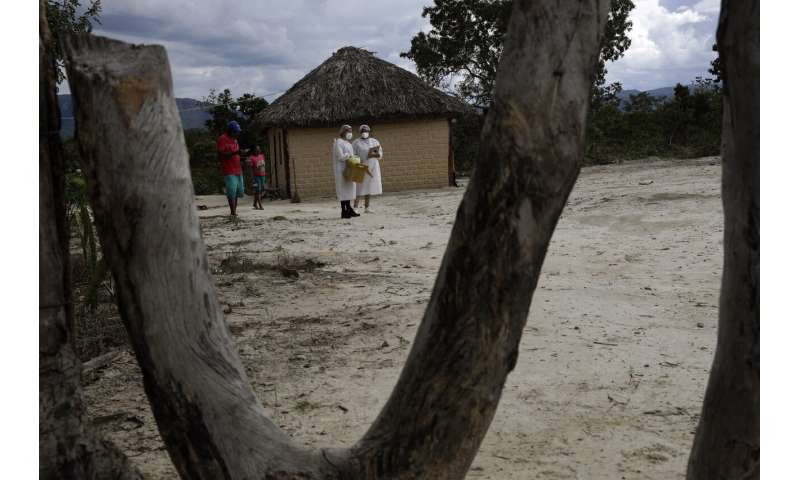 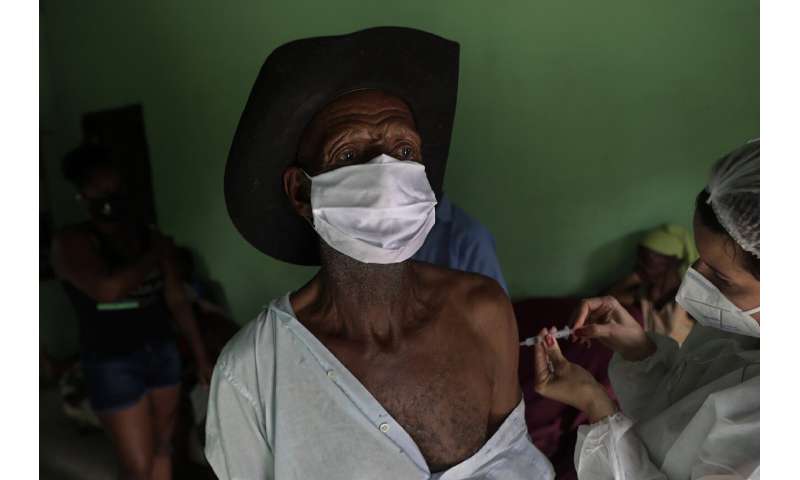 Manaus suffered a devastating second wave of COVID-19 cases in January, driven by a more contagious strain of the virus. Hospitals lacked oxygen for weeks and doctors had to choose which intensive care patients to put on ventilators.

The state has seen the number of cases and deaths ebb since, but immunization still has a way to go. New Hope, for its part, is nearing immunity. After Reinaldo de Souza Santos, 37, received his shot, he held up his vaccine card to display stickers proving he had gotten both his shots.

“My people are now calm and very happy about this vaccine,” Prancácio said. “Until there’s a vaccine, a lot of people die. But today, thank God, we’re 100% satisfied.”

In Cavalcante, quilombola Manoel Pereira and his wife, Leona, received their first shots standing beside the fence of their cassava farm. Wearing a disposable gown, Bezerra calmly delivered the dose to Pereira, who looked eager to return to his labors.