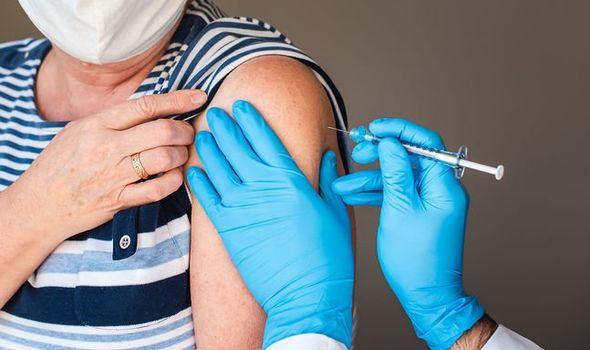 The Prime Minister yesterday urged everyone eligible to get theirs as soon as possible ‑ and announced the vaccination rollout is opening up to those in their 40s. Mr Johnson, who watched the booster programme in action at an East London GP surgery, said: “If we want to control the epidemic and avoid new restrictions, we must get vaccinated as soon as we are eligible.

“It would be an utter tragedy if, after everything we have been through, people who had done the right thing by getting double vaccinated ended up becoming seriously ill or even losing their lives because they allowed their immunity to wane.”

Professor Jonathan Van-Tam, England’s deputy chief medical officer, added his weight to the cry, revealing “signals” of waning immunity among those aged 40 to 49.

He added: “While the vaccines have fundamentally changed the course of the pandemic in the UK, it is also clear that protection will wane.

“That is especially so in older adults and those with risk conditions.

“The waning signal, while smaller, is also beginning to show in 40-49s.”

Analysis by the UK Health Security Agency shows that a top-up could lift protection against symptomatic infection from as low 45 percent to more than 90 percent.

For those whose first two jabs were AstraZeneca, the figure was 93 percent, nudging to 94 percent for people who had double Pfizer.

Effectiveness against severe disease leading to hospital admission or death is expected to be even higher.

In a previous study ‑ without a booster ‑ protection fell from 65 percent up to three months after the second dose to 45 percent at six months for the Oxford/AstraZeneca vaccine.

It tumbled from 90 percent to 65 for the Pfizer/BioNTech jab. At yesterday’s Downing Street news conference, the PM warned again of “storm clouds” gathering over Europe as a fresh wave of infections sweeps the continent.

He said: “We don’t yet know the extent to which this new wave will wash up on our shores but history shows we cannot be complacent.”

Asked if he could promise that the nation would not be plunged into a second lockdown Christmas, Mr Johnson said there was “nothing in the data” to suggest Plan B needed to be triggered. That could include the return to mandatory masks, social distancing and an appeal to work from home.

But the Premier added: “We cannot rule anything out.

“The most important thing people can do to prevent further restrictions is get the boosters.

“It’s going well, the numbers are climbing. The GPs are hitting it out of the park again, they’re doing an amazing job and getting loads of jabs into loads of arms.

“It’s starting to build momentum but we need to see the 50-plus groups and the 60-plus groups, who can also wind up in hospital, getting boosters as soon as they are called forward.”

The Joint Committee on Vaccination and Immunisation (JCVI) yesterday recommended that boosters are offered to people aged 40-49 six months after their second shot.

The decision came as Prof Van-Tam said the top-up rollout in Israel to over-60s led to a tenfold reduction in infections and an 18.7-fold cut in hospitalisation.

This compared to people who had only received the first two doses.

He added: “If the booster programme is successful, with very high uptake, we can massively reduce the worry about hospitalisation and death due to Covid at Christmas. It is as simple and as decisive as that.”

The JCVI said the data on younger age groups was being kept under review with further cohorts possibly being offered boosters later.

Young people aged 16 and 17 will be offered second doses, at least 12 weeks after their first.

The decision followed data showing the very rare risk of myocarditis (heart inflammation) associated with the Pfizer vaccine did not increase with a second.

Dr June Raine, chief executive of the Medicines and Healthcare products Regulatory Agency, said there had been a small number of reports of myocarditis in the UK and abroad. But she added: “We are not detecting any increase in risk with the second dose.

“Our message to people aged 16 and 17: it is safe to have a second dose of the Pfizer vaccine.”

There were 39,705 new Covid cases confirmed yesterday, taking the total for the past week up 12.5 percent compared to the previous seven days.

There were 47 further deaths, with the seven-day total down nine percent. Health Secretary Sajid Javid said: “This highlights just how important it is everyone gets their top-up.”

The move to extend booster doses to the 40 to 49 age group is very welcome.

Research shows us that administering a third dose induces a very strong immune response. The data indicates that it brings on 93 percent protection against symptomatic infection.

And protection against hospitalisation or death from Covid will be even higher than that.

Similar findings are coming from other countries that have an advanced booster programme, such as Israel.

There are a huge number of unknowns heading into this winter. Primarily, a combination of Covid and flu brings great uncertainty around the potential impact of those infections upon the health service.

We don’t really know how they will dovetail with each other, or what the impact of a year without flu will be.

Therefore, the more immunity we can build up now the better ‑ and this includes being vaccinated against flu.

Given there is a waning of Covid immunity around six months after the initial immunisation, it may be that the longer-term outcome is to regard Covid vaccination as a three-dose schedule, rather than two doses and then a booster when necessary.

There are other examples of three-dose immunisations in the UK, such as the one for meningitis B.

The evidence base will evolve over time and we can expect to see revisions to policy as we gain new knowledge.

We will keep an eye on the data, but in due course I would expect booster doses to be recommended for all eligible adults.

I think it is also likely that we will at some point extend Covid vaccination to children aged five to 11.

When the NHS invites you for a vaccination, please do accept it.