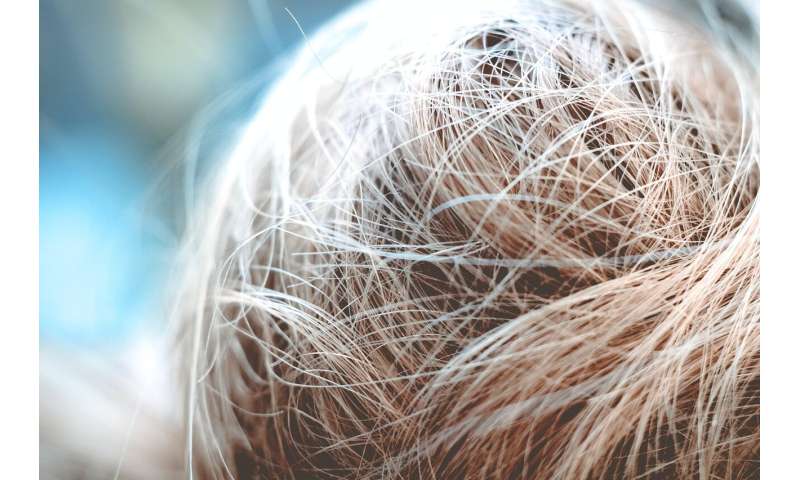 The prospect of a non-invasive test of ovarian reserve is a little closer following results from a study showing that measurement of a fertility hormone can be accurately taken from a sample of human hair.

Anti-Mullerian hormone—or AMH—has become a key marker in the assessment of how women may respond to fertility treatment. The hormone is produced by small cells surrounding each egg as it develops in the ovary, and is thus seen as a measure of ovarian reserve. Although studies have not correlated AMH levels to a reliable chance of live birth (nor to forecasting the time of menopause), AMH measurement has become an intrinsic marker in assessing how a patient will respond to ovarian stimulation for IVF—as a normal responder, poor responder (with few eggs), or over-responder (with many eggs and a risk of ovarian hyperstimulation syndrome, OHSS).

AMH is presently measured in serum taken from a blood sample drawn intravenously. The readings represent a measurement at a short moment in time and are relatively invasive to complete. Now, however, a new study presented at the online Annual Meeting of ESHRE has tested the quantification of AMH from human hair and found it to be a less invasive and a “more appropriate representation of hormone levels” than from an “acute” source like serum. The results are presented this week in a poster from Ph.D. student Sarthak Sawarkar, working in the laboratory of Professor Manel Lopez-Bejar in Barcelona, with collaborators from MedAnswers Inc in the USA.

The study, which still continues, now reports results from 152 women from whom hair and blood samples were routinely collected during hospital visits. AMH measured in serum from the same subjects was used to provide a control, as was an ultrasound count of developing follicles in the ovary (AFC) as a further measure of ovarian reserve.

“Biologically relevant” AMH levels were successfully detected in the hair samples, with levels declining with patient age, as expected. As ovarian reserve declines with age, so do AMH levels. The AMH levels from hair strongly correlated with both serum levels and AFC. It was also seen that the hair test was able to detect a wide range of AMH levels within individuals from a similar age cohort, suggesting a greater accuracy than from a single blood sample. Hormones accumulate in hair shafts over a period of months, while hormone levels in serum can change over the course of hours. “So hair,” explain the authors, “is a medium that can accumulate biomarkers over several weeks, while serum is an acute matrix representing only current levels. While hormone levels in blood can fluctuate rapidly in response to stimuli, hormone levels measured in hair would represent an accumulation over several weeks. A measurement using a hair sample is more likely to reflect the average hormone levels in an individual.”

Among the other advantages of a hair test, the authors note that hormone levels are assessed non-invasively, which reduces testing stress and offers a less expensive assay. Testing can be done without visiting a clinic, and thus makes this type of test available to a broader range of women. “Finally,” explains Mr Sawarkar, “as hair offers a look at the long-term accumulation of hormones, this measurement may allow a better understanding of an individual’s hormone levels—unlike blood-based assays, which can only measure the hormone at the moment of the testing.”

AMH has so far had an important—though sometimes controversial—role in reproductive medicine. Thus, while its role as a measure of ovarian reserve in predicting response to ovarian stimulation for IVF now seems beyond question, there has been doubt over its broader application as a measure of female fertility in the general population.