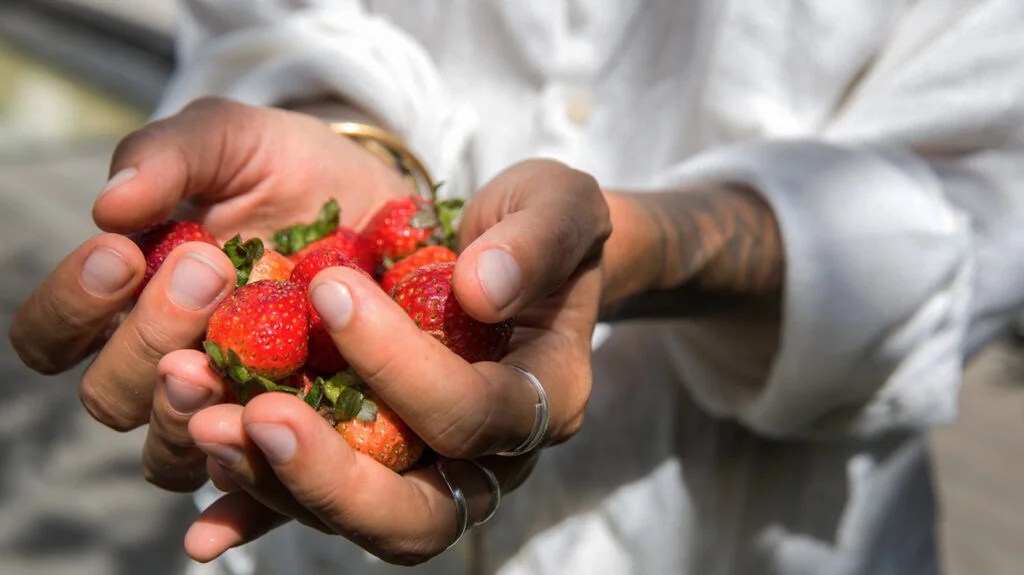 Dietary advice from healthcare professionals can seem joyless, typically requiring people to stay away from a list of treats that scientists have found to be “bad” for health.

Major exceptions to this rule are flavonoid-rich foods and drinks, which include dark chocolate, blueberries, and strawberries.

Research indicates that flavonoids may protect against:

A new study now suggests that the bacteria that live in our gut, known as the gut microbiota, may be partly responsible for the beneficial effect of dietary flavonoids on blood pressure.

High blood pressure is a major risk factor for cardiovascular disease, which is the leading cause of death in the United States.

Researchers at Queen’s University Belfast in Northern Ireland, United Kingdom, recently led a study that found that individuals who consumed the most flavonoid-rich foods tended to have lower blood pressure.

The diversity of participants’ gut microbiota accounted for a significant portion of the association between flavonoids and blood pressure.

Specifically, the scientists’ analysis found that eating 1.6 servings of berries a day — where one serving equals 1 cup or 80 grams of berries — was associated with an average reduction of 4.1 millimeters of mercury (mm Hg) in systolic blood pressure.

The diversity and composition of the gut microbiota explained about 11.6% of the association between berry consumption and blood pressure.

Similarly, drinking 2.8 glasses of red wine a week (125 milliliters per glass) was associated with a 3.7-mm Hg reduction in systolic blood pressure. The gut microbiota accounted for 15.2% of this association.

She told Medical News Today that a class of flavonoids called anthocyanins appears to be key to this effect.

Anthocyanins are the pigment molecules responsible for the red or blue color of many fruits, including red grapes, blueberries, blackcurrants, and blackberries.

Previous research has found that gut bacteria break down flavonoids into compounds that have more powerful protective effects on the heart.

“A better understanding of the highly individual variability of flavonoid metabolism could very well explain why some people have greater cardiovascular protection benefits from flavonoid-rich foods than others,” says Prof. Cassidy in a press release on the study.

The research appears in the journal Hypertension.

For their study, the researchers analyzed data on 904 adults aged 25–82 years who were part of a medical database in Germany called the PopGen biobank.

The team evaluated participants’ flavonoid intake over the previous year using a food questionnaire that assessed their consumption of 112 different foods.

To measure the diversity and composition of the participants’ gut microbiota, the scientists used a standard technique that involves sequencing the genetic material of bacteria in stool samples.

To get a uniform, reliable measure of the volunteers’ blood pressure, the researchers asked them to fast overnight. In the morning, the participants rested for 5 minutes before the team took three consecutive measurements of their blood pressure at 3-minute intervals.

The scientists used the average of the second and third measurements in their analysis.

They accounted for a wide range of other factors that could affect the participants’ blood pressure, including their sex, age, smoking status, medication use, physical activity, and family history of coronary artery disease.

The study paper makes no mention of the participants’ race or ethnicity.

Higher consumption of berries, apples, pears, and red wine — which are all rich in flavonoids — was associated with lower systolic, though not diastolic, blood pressure.

Berries on a budget

As fresh berries, such as strawberries, blackberries, and blueberries, can be expensive, some people may find it difficult to eat them regularly.

However, Prof. Cassidy advised MNT that frozen berries, which retain their anthocyanin content, may provide a cost effective alternative.

She added that there is currently limited evidence that flavonoid supplements provide the same benefits as dietary flavonoids.

In the long term, Prof. Cassidy said that scientists could create prebiotic or probiotic foods that help reduce blood pressure by promoting the breakdown of flavonoids by gut bacteria.

“At the moment, this research area is in its infancy, but down the line, once we establish which bugs are required to metabolize and break down flavonoids into more bioactive forms in the gut, there is the potential to design pre- or probiotics to enhance flavonoid metabolism,” she said.

Prof. Cassidy receives funding from and is an advisor to the U.S. Highbush Blueberry Council.

Tracy Parker, who is the senior dietitian at the British Heart Foundation and was not involved in the research, welcomed the new findings.

“However, this isn’t the all clear to crack open a bottle of red wine,” she told MNT.

She pointed out that the increased risks of stroke and vascular dementia associated with alcohol consumption outweigh any potential benefits of drinking red wine.

“The best way to keep your blood pressure under control is by eating a balanced diet, including plenty of fruit and vegetables, getting regular exercise, and maintaining a healthy weight,” she concluded.

The authors note some limitations of their study, including the fact that flavonoid-rich foods contain other health-promoting chemicals, such as resveratrol.