Anyone unlucky enough to have caught a cold over the last year despite lockdowns may have noticed that it didn’t quite hit in the same way as before. Maybe they felt more fatigued, more achey, more sniffly, more blergh.

Now as restrictions ease in the country’s two biggest cities and people start to mingle again, Associate Professor Ian Mackay, a virologist from the University of Queensland, expects we are about to see this on a larger scale despite the warming weather.

“More colds will definitely happen as we come out of lockdown and mix again,” he says. 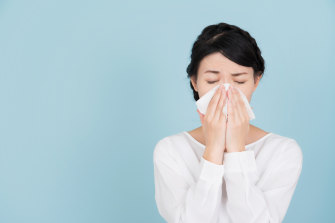 Feel like you’ve been hit harder by a cold? You’re not imagining it.Credit:iStock

Mackay is drawing on recorded data. Typically, the roughly 200 respiratory viruses that cause common cold symptoms (runny nose, sore throat, headache, muscle pain, and so on) have been deemed to be seasonal.

But, much to Mackay’s surprise, the pandemic bucked this trend. NSW Health figures for respiratory virus infections show there were abnormal spikes last summer compared to the previous five years. For example, while there has been very little influenza, rhinoviruses and respiratory syncytial viruses have had remarkably large peaks in the warmer months, instead of the usual cooler weather.

“So we have much to learn,” Mackay says. “Clearly they’re not seasonal. It’s more about how much of the population’s immunity is up to speed with defending against them … because when it’s low these viruses can do what they like, whenever they like.”

As Mackay explains, the most likely reason why you may feel more unwell than usual when you catch a cold is because germs were stopped from racing through the community during lockdown, causing immunity to wane.

We tend to be first exposed to most common cold viruses in our infancy, and then as we continue to encounter each specific virus over the rest of our lives, we may get very little to no symptoms, but our body’s immunity is being topped up every time we get reinfected. (It’s why young children tend to be less resilient, while doctors and teachers are more so.)

“So lockdown probably stopped or reduced that topping up. We still have all our memory T-cells, which are a really important part of the immune system, but the antibodies – one of the first things to stop viruses from taking hold and causing disease – may be low,” Mackay says.

“And so when we all come out and get hit with one of those infections … we might get a little bit sicker than we normally would.”

This mechanism is why it’s not a good sign for the flu next year either. In the US, where influenza levels have been similarly low, Center for Diseases Control director Dr Rochelle Walensky has warned that reduced population-level immunity could place the country at risk of a severe flu season.

There are other possibilities that could cause us to feel more crook with a cold, Mackay says. One is that during our time in lockdown, new variants of particular viruses may have emerged which we don’t recognise, leading to worse symptoms.

Another is that because some respiratory viruses typically circulate every couple of years as they wait for the population’s immunity to naturally drop off or for new baby cohorts to emerge, it may just be that there is a more severe type dominating.

Finally, there’s the mind. Mackay says our bias could be a factor, simply from not having experienced much respiratory illness recently. “It might just be a normal cough and cold but it feels like it’s worse because we haven’t had one for a while.”

Scientists like Mackay will be closely watching what happens with cold and flu as NSW and Victoria reopen.

“I’d encourage people even if they’re vaccinated to continue to use infection control measures,” she says.

Though unlike being ill with COVID-19, viruses that cause the common cold aren’t usually a matter of life and death. So if you’re feeling a cold more than usual these next few months, just know it’s probably not only in your head – and it will pass. But Mackay adds that all have the rare potential to cause severe illness.

“We should be respecting all respiratory viruses a bit more … We’re now living with more understanding that these viruses are spread mainly through an airborne route – not droplets, but tiny little floaty particles that we can be exposed to in a short time and get infected. I think we should act on that learning and not just ignore it,” he says.

“We could do more to prevent disease and hospital overload among kids and the very elderly due to respiratory viruses, so we need to watch these patterns, and perhaps in the future, laboratories could warn the public when we see a peak in one of them, that maybe it’s time to put a mask on for the next two weeks … It’s not a big impost and it helps people stay safe and well.”