Author, 57, reveals his ‘headaches’ turned out to be TWO silent brain tumours that had fused together five years ago

A man suffering from severe headaches only discovered they were caused by two brain tumours that had fused together after he collapsed on the street.

And even though the super tumour was successfully removed the 57-year-old was left with psychosis due to the amount of brain tissue cut away in the operation.

Tim Cooper, from Sutton, Surrey, had suffered from painful headaches for about five years but put off going to his GP as they disappeared after he went to sleep.

However, a sudden unexplained collapse in 2018 which left Mr Cooper unconscious on the street led to the discovery his headaches were caused by two tumours that had silently been growing in his brain for half a decade before fusing together.

Mr Cooper, who described himself prior to the discovery of the tumour as being ‘overweight but generally happy’, said there had been no warning of the serious trouble he was in.

‘I was experiencing severe headaches, but they would clear after a sleep so, I didn’t approach my doctor about it,’ he said.

‘I had lost my drive and motivation, but this was only explained to be related to the tumour once I was diagnosed.’ 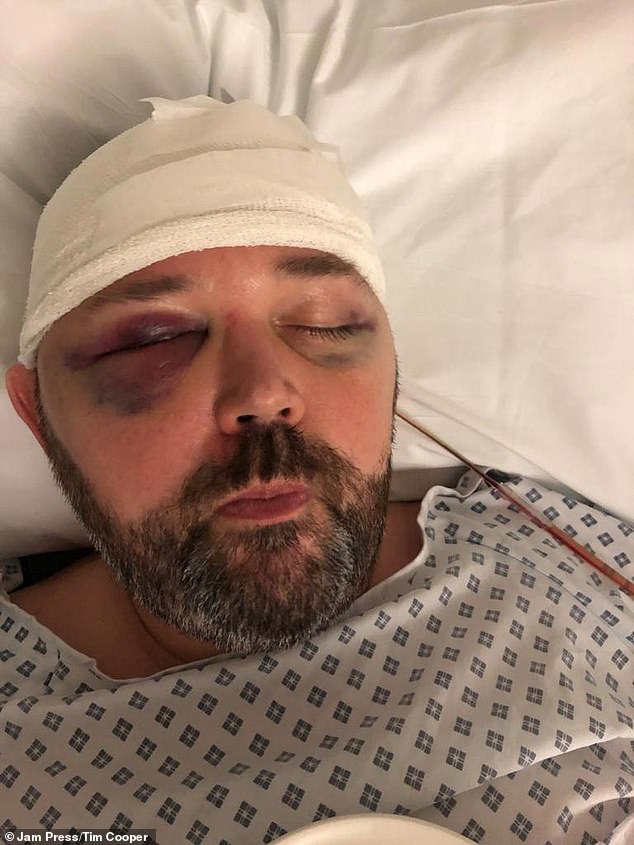 Tim Cooper, 57, underwent brain surgery to remove two tumours that had fused together, with medics saying they had grown silently with no obvious symptoms for up to five years 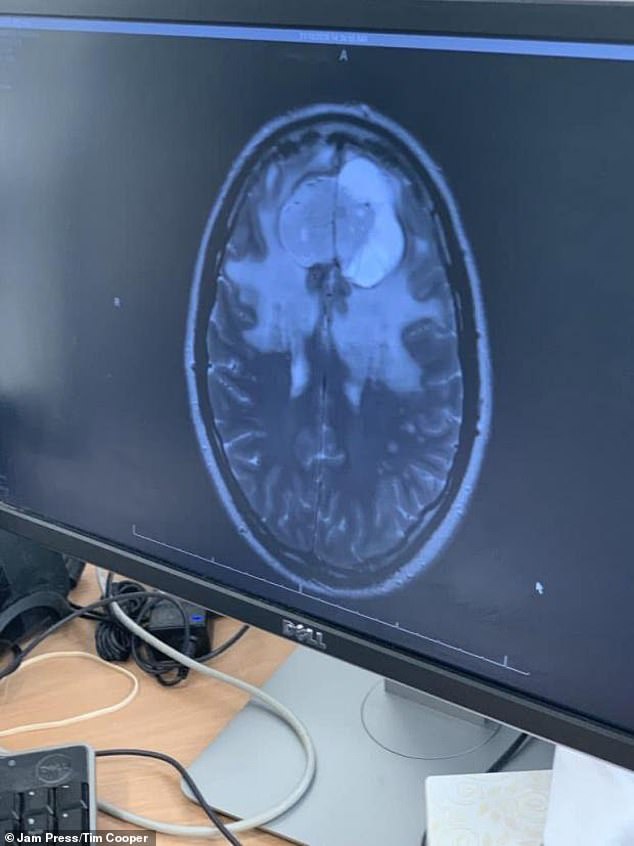 A benign (non-cancerous) brain tumour is a mass of cells that grows relatively slowly in the brain.

Non-cancerous brain tumours tend to stay in one place and do not spread. It will not usually come back if all of the tumour can be safely removed during surgery.

If the tumour cannot be completely removed, there’s a risk it could grow back.

The symptoms of a non-cancerous brain tumour depend on how big it is and where it is in the brain.

Some slow-growing tumours may not cause any symptoms at first.

But common symptoms include:

People should see their GP if they have these symptoms.

How is it treated?

Treatment for a non-cancerous brain tumour depends on the type and location of the tumour.

Surgery is used to remove most non-cancerous brain tumours, and they do not usually come back after being removed. But sometimes tumours do grow back or become cancerous.

If all of the tumour cannot be removed, other treatments, such as radiotherapy and chemotherapy, may be needed to control the growth of the remaining abnormal cells.

Once the combined tumour was discovered doctors from St. Georges Hospital in Tooting booked Mr Cooper in for surgery to remove the growth. Thankfully subsequent tests revealed that the tumour was benign.

However, Mr Cooper’s ordeal was far from over as he started to behave erratically after the surgery.

‘As a result of how much my brain was cut into for the surgery, I suffered from organic psychosis which was compounded by a bad reaction to my anti-epileptic medication which caused some serious side effects,’ he said.

‘My psychosis was really taking hold of me and putting extreme pressure on my marriage, I had become aggressive, acting strangely and making irrational decisions.’

He was once again admitted to St George’s and spent seven days in hospital being treated by the neuropsychiatric team who eventually prescribed him an antipsychotic medication and released from hospital.

Throughout the Covid lockdown his condition improved and he has eventually able to reduce his medication.

Mr Cooper also recalled how he relied on the kindness of a stranger following his initial collapse.

‘A young man had seen me walking along the pavement ahead of him one minute, then the next I was not there,’ he said.

‘He came to my aid, saw that I was unconscious and had severely injured my face. He called the emergency services for an ambulance but they estimated that it would be two hours before they could get to us.’

Mrs Cooper then rushed to the scene in her car and with the help of the young man, got her husband to hospital.

With Mr Cooper struggling to comprehend was what happening he explained how his wife had to deal with seriousness of the situation by herself.

‘I was not able to take all this in when it was explained to us as I was heavily sedated with the medication I have been put on,’ he said.

‘My wife completely realised the full magnitude of the diagnosis and had to face this all on her own.’

Mr Cooper has now written a book about his experience, called The Stone in My Head, named after the nickname he gave his tumour when explaining his condition to his niece, and published in collaboration with StoryTerrace.

‘I felt I had to write it to give hope to others. I am one of the lucky ones,’ he said.

“I have a story that I hope provides hope to others and that there is a chance to come through to the other side.

‘My motto throughout was onwards and upwards and that remains the same today.