A few weeks ago, a home test for oral and throat cancer was launched in the United States, and it is being marketed directly to the general public, aimed at former or current tobacco users and anyone 50 years or older.

Individuals can order the test — CancerDetect Test for Oral & Throat Cancer — directly from its maker, Viome Life Sciences, for $399.

It is not covered by medical insurance, and is not approved by the US Food and Drug Administration. The test is being marketed under the agency’s “laboratory developed test” rubric. 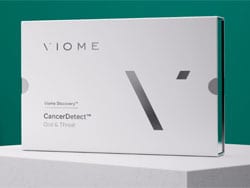 People who qualify and buy the test are mailed a saliva collection tube, which they fill and mail back. The company then analyzes the RNA for changes in human cells and the oropharyngeal microbiome that are associated with cancer. During a 15-minute telemedicine conference — included in the $399 cost — those who test positive are told to follow up with a secondary care center for a definitive diagnosis.

Banavar said people have been buying the test every day since it was launched in early August, but he declined to give specific sales figures.

CancerDetect’s tagline is “test at home for peace of mind.” The test “brings unprecedented accuracy to early cancer detection and prevention,” the company said in a press release announcing the launch.

The test showed an overall specificity of 94% and sensitivity of 84.2% to 90% for cancer in Viome’s  latest study, which is posted on medRxiv.org as a preprint. Banavar said it has been submitted to a top-tier medical journal.

Viome plans to market CancerDetect “in every possible way” to consumers, including social media, Banavar said. CancerDetect is not sold on Amazon at the moment, but the company sells another at-home test for gut microbiome plus cellular health on the website.

As for outreach to the medical community, “we will start doing that with dentists first” and then eventually oncologists and other doctors, but “our primary target is to get out to the consumers themselves,” Banavar said.

Viome’s main goal is to help consumers be proactive regarding their health, he said.

The marketing push means that sooner or later, oncologists will likely have to deal with a patient who tests positive on CancerDetect, so Medscape Medical News turned to numerous experts for their thoughts. None had heard about the test, but one responded with comments.

“I am happy to see industry working on strategies for the early detection of oral and throat cancers,” and CancerDetect has “potential,” said surgical oncologist Saral Mehra, MD, MBA, chief of head and neck surgery at Yale School of Medicine in New Haven, Connecticut.

However, after reviewing the study posted on medRxiv, Mehra advised caution. He said he was concerned about false negative results leading to missed cancers and false positives leading to unnecessary anxiety and testing.

According to the medRxiv preprint, the test was developed and validated using saliva samples from 1175 people 50 years or older as well as adults with a history of tobacco use.

The test also correctly identified 126/134 people as cancer-free, for a specificity of 94%.

Commenting on the results, Mehra noted that “the power of the study, especially for subgroup analysis, was low,” and investigators “used both advanced stage and early-stage cancer patients in the model, while the target population for this test is early stage.”

“The research needs to be tightened significantly on specific target populations, the models adjusted to really limit false negatives, and a plan [put in place] to act upon positive results,” he said.

Also, the ability of CancerDetect to pick up premalignant lesions — “the greatest value in a screening test” — is not clear, he added.

Viome’s Banavar said that CancerDetect is in its first iteration, and the test uses machine learning, so its diagnostic performance will improve with the ongoing addition of real-world data.

The company is organizing a pivotal trial in order to gain formal FDA approval, with results expected in a year and a half or so, he said.

Viome is pushing ahead with its RNA diagnosis technology for the entire range of alimentary canal cancers and disorders, including inflammatory bowel disease. The company has partnered with pharmaceutical companies, including GSK for vaccines, Banavar said.

M. Alexander Otto is a physician assistant with a master’s degree in medical science and a journalism degree from Newhouse. He is an award-winning medical journalist who worked for several major news outlets before joining Medscape and is also an MIT Knight Science Journalism fellow. Email: [email protected]