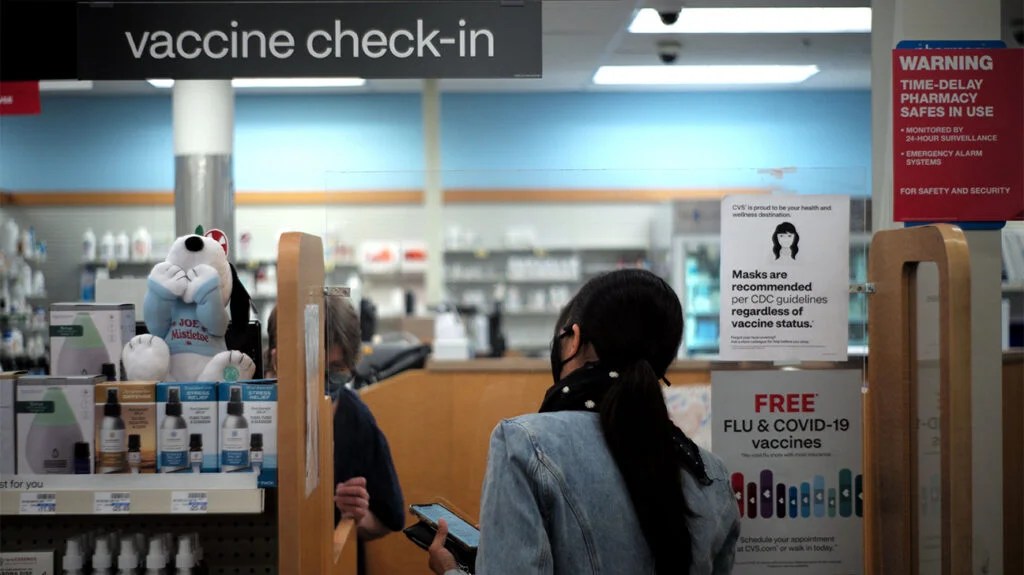 Some studies suggest that the protection offered by currently authorized COVID-19 vaccines against contracting a SARS-CoV-2 infection and developing severe disease starts to wane after a few months.

Some experts suggest that this decline in immunity against SARS-CoV-2 may have contributed to the recent rise in COVID-19 cases in the United States and Europe.

However, COVID-19 vaccines continue to confer a reasonably high degree of protection against severe disease and death at least 6 months after vaccination.

The evidence of waning protection against the Delta variant of SARS-CoV-2 led health agencies in the U.S. and Europe to authorize the use of boosters for older individuals and those at higher risk of developing COVID-19 earlier this year.

The recent rise in COVID-19 cases has prompted public health agencies in the U.S. and some European countries to expand the eligibility for booster shots to all individuals over the age of 18 years.

Moreover, the Centers for Disease Control and Prevention (CDC) allow individuals to choose a different vaccine for their booster shot than the one they received for their initial two doses.

Such a mix-and-match approach to vaccination, otherwise known as heterologous dosing, may be advantageous over a homologous schedule, which involves the use of the same vaccine for the prime and the boost.

Previous studies that used heterologous dosing for the initial two doses suggested that this approach may provide greater protection against a SARS-CoV-2 infection than a homologous schedule.

Data on the inflammatory side effects and immune protection offered by different heterologous and homologous COVID-19 prime-boost vaccine schedules are necessary to make policy decisions about the choice and dose of the booster vaccine.

A recent randomized clinical trial called COV-Boost assessed the safety of and immune response generated by heterologous and homologous booster schedules in individuals who received two initial doses of either the Oxford-AstraZeneca vaccine or the Pfizer-BioNTech vaccine.

The study found that both schedules were effective in boosting immune response at 28 days after the booster shot and produced well-tolerated side effects.

The study appears in the journal The Lancet.

The Oxford-AstraZeneca and Pfizer-BioNTech vaccines deliver the genetic information that encodes for the SARS-CoV-2 spike protein to human cells, enabling them to produce this protein.

The production of the coronavirus spike protein by cells in the human body generates an immune response involving antibodies and T cells.

Neutralizing antibodies produced by B cells, which are a type of white blood cell, bind to the virus to disrupt its ability to infect human cells. Some studies have suggested that neutralizing antibody levels tend to predict the degree of protection against SARS-CoV-2 infection.

The levels of neutralizing antibodies against the wild-type SARS-CoV-2 tend to wane a few months after the second dose of the vaccine.

In other words, the decline in the neutralizing antibody response may result in limited protection against SARS-CoV-2 infection.

Vaccination also results in the generation of memory immune cells that persist despite the decline in neutralizing antibodies. These memory cells form the second line of defense and prevent severe disease after the infection has occurred.

The presence of memory T cells, which are another type of white blood cell, can help launch a rapid T cell response after infection. T cells help eliminate infected cells to prevent the spread of the infection.

So, early activation of T cells due to vaccination plays a critical role in preventing severe COVID-19 and death.

Studies have suggested that COVID-19 boosters can help enhance immunity against the Delta variant and prevent breakthrough infections.

The recent study examined the effects of seven different COVID-19 vaccines as booster shots on the immune response at 28 days in individuals immunized with two doses of either the Pfizer-BioNTech or Oxford-AstraZeneca vaccine.

The researchers assessed the changes in antibody levels at 28 days to estimate the protective effects conferred by these booster vaccines against SARS-CoV-2 infection.

The vaccines the researchers tested in the study were:

Lead study author Dr. Saul Faust, Ph.D., a professor at the University of Southampton in the United Kingdom, says: “The side effect data show all seven vaccines are safe to use as third doses, with acceptable levels of inflammatory side effects like injection site pain, muscle soreness, [and] fatigue.”

Dr. James Shepherd, Ph.D. — a professor at Yale School of Medicine in New Haven, CT, who was not involved in the study — spoke to Medical News Today about the findings. He told us:

“The COV-Boost results from the U.K. are reassuring but not surprising. The broad ability of vaccines to boost each other in a heterologous prime-boost strategy, measured mainly by antibody increases as a surrogate for ‘real-world’ immunity, would be expected.”

“Most of the vaccines use the same antigen, the spike protein, as an immune stimulus and can therefore boost each other,” he explained. “This gives public health programs reassurance that booster campaigns can focus on delivering whatever shot is available into the arm rather than the more complicated distribution and delivery of ‘matching’ booster shots,” added Dr. Shepherd.

The recent study involved 2,878 participants who were recruited at 18 study sites in the U.K.

The participants received any one of the seven vaccines listed above as the third dose during the study.

The researchers split the participants into younger and older age groups during the data analysis. The younger group consisted of participants aged 30–69 years, and the second group included individuals aged 70 years and older.

The team also assessed the safety of and immune response generated by using half-doses of the Valneva, Pfizer-BioNTech, and Novavax vaccines. A control group received a dose of the meningococcal conjugate vaccine.

The researchers asked the participants to maintain a daily electronic diary to track any adverse effects. They further assessed the safety of the vaccine booster shots during the subsequent visits at the trial site.

The side effects observed after the booster dose were generally acceptable with all vaccines. Injection site pain, headache, and fatigue were the most common side effects.

The inflammatory adverse effects were more pronounced with certain vaccines. For instance, the Johnson & Johnson booster produced moderate-to-severe side effects in individuals under the age of 70 years who were primed with two doses of the Pfizer-BioNTech or Oxford-AstraZeneca vaccine.

The researchers collected blood samples from the participants 28 days following their booster shot to assess the levels of antibodies against the spike protein.

They also conducted assays to assess the levels of neutralizing antibodies and the T cell response. These assays measured the immune response against the wild-type SARS-CoV-2 and the Alpha, Beta, and Delta variants.

Among the participants who received two initial doses of either the Oxford-AstraZeneca or Pfizer-BioNTech vaccine, all of the experimental booster vaccines produced higher antibody levels against the spike protein at 28 days than the control group. The only exception was the Valneva vaccine, which did not increase antibody levels in individuals primed with two doses of the Pfizer-BioNTech vaccine.

The researchers observed similar results with the booster vaccines for the increase in neutralizing antibodies against wild-type SARS-CoV-2 and the variants of concern.

The study authors note that these results support the approach of using vaccines designed against the wild-type coronavirus, despite the emergence of new variants.

Participants who received the Oxford-AstraZeneca or Pfizer-BioNTech vaccine prime showed an increase in the T cell response after receiving a booster with the Pfizer-BioNTech, Moderna, or Johnson & Johnson vaccine. In contrast, individuals who received all three doses of Oxford-AstraZeneca did not show an increase in T cell response compared with the control group.

Moreover, the Valneva vaccine — which uses inactivated whole virus — did not increase T cell response in individuals primed with two doses of either the Oxford-AstraZeneca or Pfizer-BioNTech vaccine.

The Moderna and Pfizer-BioNTech booster shots produced the highest increase in the immune response. However, the study used the full dose (100 micrograms of mRNA) of the Moderna vaccine instead of the CDC-approved half-dose. This is because the study took place in June, which was before the authorization of the use of the vaccine for booster shots.

In sum, these results suggest considerable variation in the immune response and inflammatory side effects produced by different vaccine boosters. These results will allow public health agencies and policymakers to make recommendations for booster vaccination programs after taking the side effect profile, availability of vaccines, and susceptibility to COVID-19 into consideration.

Besides potentially reducing side effects, the use of a half-dose of the vaccine as a booster shot may allow the vaccine to reach more people around the globe.

Dr. Duane Wesemann, Ph.D., a professor at Harvard Medical School in Boston, told MNT: “In light of Omicron and the continued threat of other emerging variants, magnitude of response may matter a lot more. Current vaccines are related in that they present to the immune system the pre-variant version of the SARS-CoV-2 spike. If Omicron has substantial immune evasion features as feared, more robust immunity to this pre-variant spike would likely be necessary for adequate protection.”

“It is clear that neutralizing antibodies correlate strongly with protective efficacy. That said, it is very likely that T cells play a role as well, which would be less affected by Omicron, so T cell immunity will likely still be induced, but how much protection [this can] provide in the setting of severely weakened antibody response is not clear,” he added.

The study was conducted at multiple sites and did not include participants receiving the half-dose and full dose of the Pfizer-BioNTech vaccine at the same site. The researchers note that they could not draw a statistical comparison between the two Pfizer-BioNTech groups, making it impossible to draw any direct conclusions.

The authors also note that the study included only individuals aged 30 years and older, with a majority of participants being white. For this reason, their findings may not apply to the entire population.

Lastly, the team assessed the immune response at 28 days after the booster shot, and the results do not indicate long-term protection. The study design of the clinical trial includes the collection of blood samples at 84 and 365 days to assess the long-term immune protection offered by the booster shots.