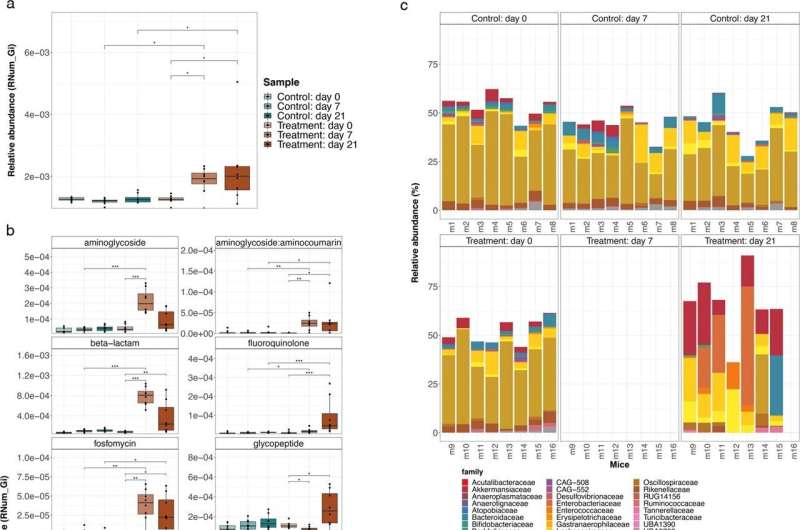 Antibiotics are commonly used to treat infections and ensure the safety of surgical procedures. However, their overuse has led to the emergence and spread of resistant bacteria, resulting in an “arms race” whereby ever more potent drugs are becoming a necessity. As antimicrobial resistance represents an ever-growing healthcare challenge worldwide, researchers from the Systems Ecology research group at the Luxembourg Center for Systems Biomedicine (LCSB) and the Department of Life Sciences (DLSM) and from the Molecular Disease Mechanisms group at DLSM explored the impact of antibiotic treatment on the microbial community inhabiting the gut of mice. Their results, recently published in Nature Communications, highlight that some bacteria are more likely to acquire antimicrobial resistance genes than others. The researchers also describe the key mechanisms involved in the short-term evolution of antibiotic resistance within the gut microbiome.

Studying the gut resistome in a murine model

The use of antibiotics both in the treatment of human disease and in animal husbandry has fueled the build-up of antimicrobial resistance (AMR) globally. Many bacteria have now developed resistance to several classes of antibiotics, preventing the comprehensive treatment of infections and resulting in a rapidly growing number of deaths worldwide. A recent publication in The Lancet shows that, in 2019, the global burden associated with drug-resistant infections was estimated at approximately 5 million deaths, of which AMR was the direct cause of around 1.3 million deaths. “The current trend is clearly not downwards, with COVID-19 further fueling the issue of antimicrobial resistance, leaving us on the course of 10 million deaths per year by 2050,” details Prof. Paul Wilmes, head of the Systems Ecology group. “This is why AMR is currently referred to as the ‘silent pandemic.’ However, there is still a lot to learn about its evolution, timescales and transmission.”

The researchers from the University of Luxembourg used a mouse model to better understand the mechanisms shaping the progression of antimicrobial resistance. By treating a group of mice with a broad-spectrum antibiotic cocktail—representative of regimens used in preoperative procedures—and following its effect on their gut microbiome over time, they studied how some bacteria gain antimicrobial resistance genes. “We designed our study to understand at which stage the resistance genes are acquired and how resistant pathogens can emerge after a single antibiotic course,” explains Dr. Laura de Nies, post-doctoral researcher in the Systems Ecology group and co-first author of the publication.

The researchers observed a major shift in the composition of the gut microbiome of the antibiotic-treated mice. While most of the resident bacterial populations were depleted due to the treatment, Akkermansia muciniphilaand members of the Enterobacteriaceae, Enterococcaceae and Lactobacillaceae families remained recalcitrant to antibiotic treatment.

“Interestingly, we already know that these bacteria are enriched in the gut of Parkinson’s disease patients and are associated with other chronic diseases,” adds Dr. Elisabeth Letellier, head of the Molecular Disease Mechanisms group. “The fact that they are more resistant to antibiotics shows how widespread the implication of AMR can be and how important it is to better understand the underlying mechanisms.”

Besides the changes in the composition of the gut microbiome, the scientists also observed that antibiotic-treated mice exhibited significantly higher abundances in antimicrobial resistance genes. More specifically, they saw an increase in genes conferring resistance against three out of the four administered antibiotics and the analyses suggest that these genes were probably acquired over time rather than being originally encoded withing the bacteria DNA. “Our results show that the selective pressure of the administered antibiotics may lead to real-time evolution of antimicrobial resistance within the gut microbiome,” explains Dr. Susheel Bhanu Busi, member of the Systems Ecology group and co-first author of the publication. “It means a single treatment may already be enough to drive change within the microbial community and to lead to the acquisition of new resistance genes by some of the bacteria.”

It is already known that bacteria can develop antimicrobial resistance through two distinct genetic mechanisms, either spontaneous mutations or the accumulation and dissemination of resistance genes via mobile genetic elements (MGEs). These elements are a type of genetic material that can be transferred from one species to another. They promote the transfer of resistance genes between bacterial populations through a process known as horizontal gene transfer.

To better understand the mechanism leading to the observed increase in antimicrobial resistance genes in the antibiotic-treated mice, the researchers investigated the role of MGEs. They found that integrons, a specific type of mobile genetic element, played a key role in mediating antibiotic resistance against the administered antibiotic cocktail. “The resistance genes found in our antibiotic-treated mice were mostly conferred by integrons, highlighting an underrated genetic mechanism for the transmission of antibiotic resistance,” describes Prof. Paul Wilmes. “These results shed light on the short-term processes shaping the composition of antibiotic-exposed communities and the evolution of antimicrobial resistance.”