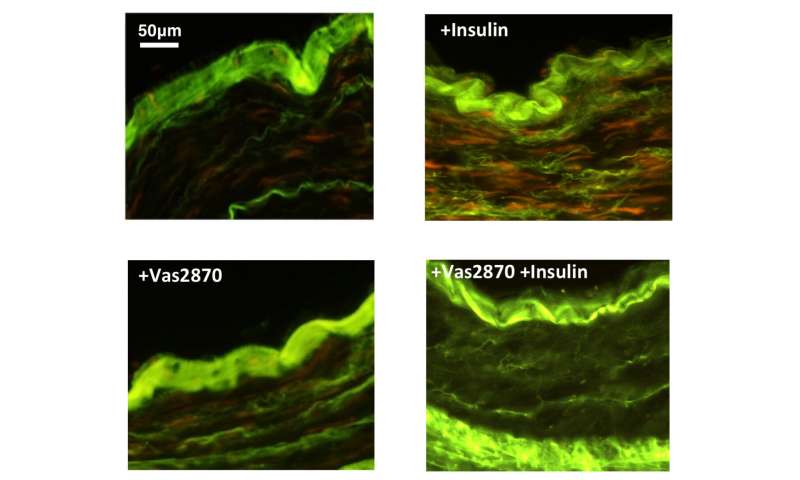 A team of researchers affiliated with institutions in the U.K., Greece and Germany has found a new way to treat insulin damaged blood vessels associated with heart disease. In their paper published in the journal Science Translational Medicine, the group describes how they studied blood vessels in multiple heart surgery patients and what they learned by doing so.

Atherosclerosis is a disease of the arteries that is characterized by fatty buildup on the inner walls—a condition that can lead to elevated blood pressure, heart attacks and strokes. Prior research has suggested that insulin can contribute to the development of atherosclerosis in diabetes patients—but thus far, it has not been clear how. Also complicating treatment is the lack of reversal of atherosclerosis in diabetes patients who are given medications to control insulin levels. In this new effort, the researchers conducted a study of blood vessels in patients with atherosclerosis who were having coronary bypass surgery to better understand the condition.

In all, the researchers analyzed the blood vessels of 674 patients and in so doing discovered a pattern—the blood vessels were resistant to insulin. This was a problem because insulin controls blood vessel tone, which is the process by which they are dilated. More open blood vessels allow more blood to pass through, whereas more constricted vessels allow less—which can lead to an increase in blood pressure. The researchers also found evidence of stress in the blood vessels due to oxygen molecules. And perhaps more importantly, they found that insulin led to problems with the cells that line the inside of the vessels. This was important because it meant it was treatable. To that end, the team treated both mice and human patients with an inhibitor of the enzyme DPP4, which reduced oxidative stress on the blood vessels. They found it also led to a reversal of vascular damage in both humans and mice fed a high-fat diet.