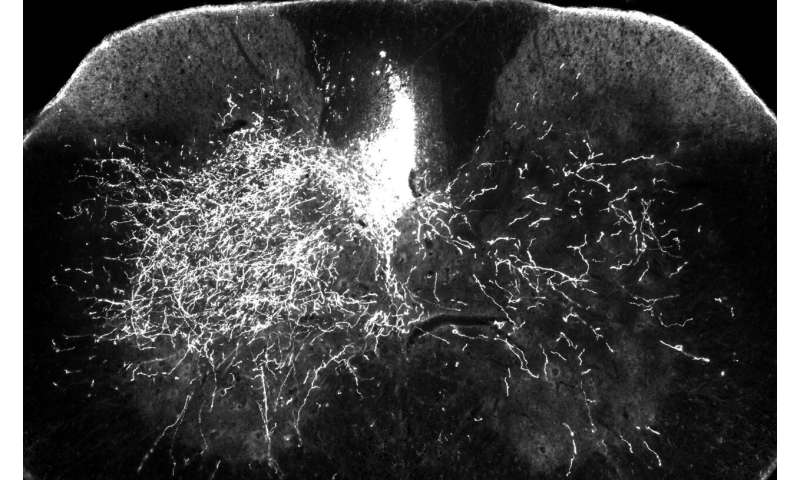 The drug blocks activity of a protein that has a key role in the growth process of axons, the long, slender extensions of nerve cell bodies that transmit messages. The protein stops axon growth at times when synapses form, allowing transmission of information to another nerve cell.

The research showed that gabapentin blocks the protein from putting on its brakes, which effectively allowed axons to grow longer after injury.

“There is some spontaneous recovery in untreated mice, but it’s never complete. The treated mice still have deficits, but they are significantly better,” said senior author Andrea Tedeschi, assistant professor of neuroscience at The Ohio State University.

“This research has translational implications because the drug is clinically approved and already prescribed to patients,” he said. “I think there’s enough evidence here to reconsider how we use this drug in the clinic. The implication of our finding may also impact other neurological conditions such as brain injury and stroke.”

The regained function in mice occurred after four months of treatment—the equivalent of about nine years in adult humans.

“We really have to consider that rebuilding neuronal circuits, especially in an adult central nervous system, takes time. But it can happen,” said Wenjing Sun, research assistant professor of neuroscience at Ohio State and first author of the publication.

The study is published in the Journal of Clinical Investigation.

The spinal cord injury in these mice is located near the top of the spine. Humans with this type of injury generally lose enough sensation and movement to require assistance with daily living tasks.

After receiving gabapentin for four months, the treated mice were better able to move across a horizontal ladder and spread their forelimb toes than untreated mice. When the researchers used a special technique to silence neurons in the repair pathway they had targeted, there was no difference in functional recovery between treated and untreated mice.

“Now we can comfortably say that whatever we see in terms of structural and functional alterations of this motor pathway is really meaningful in promoting recovery in these mice,” Tedeschi said.

Tedeschi noted that in this study, treatment with gabapentin occurred much earlier than is typical in human medicine, when it is prescribed to treat existing neuropathic pain and other neurological conditions.

A retrospective study of European medical data published in 2017 showed that individuals who had received anticonvulsants—gabapentin or a similar drug—early after spinal cord injury regained motor function. It was not a clinical trial, but the analysis showed an association between taking a class of drugs called gabapentinoids and regaining muscle strength.

Plenty of questions remain: how and when to adjust the amount of gabapentin used for treatment, and whether the drug could be combined with other interventions used to promote repair of an injured spinal cord at chronic stages. But testing the effectiveness of the drug in larger animal models is a logical next step prior to embarking on clinical trials, Tedeschi said.

“With all the evidence and mechanistic insight we provide, I feel like we are in a better situation to start planning a more translational type of research,” he said. “It’s the right time to try.”

Tedeschi’s research focuses on neurons in the corticospinal tract—specifically motor neurons that carry signals from the central nervous system to the body telling muscles to move. These cells are particularly important in controlling voluntary movement, which is impaired in cervical spinal cord injuries modeled in the study.

This work builds upon the recent discovery of the regulatory role of a neuronal receptor called alpha2delta2 in controlling axon growth ability. Tedeschi and colleagues have determined that alpha2delta2 facilitates synapse formation by putting on the brake for axon growth, an essential step during the development of the central nervous system.

The researchers discovered in the current study that after a cervical spinal cord injury, affected motor neurons above the spine increased the expression of this receptor, interfering with axons’ ability to regrow. If axon repair doesn’t go as expected and neuronal circuits are reorganized improperly, individuals with spinal cord injury may experience uncontrolled movement and pain.

“When neuronal circuits need to be rebuilt after injury, we need to down-regulate the expression of the receptor so axons can re-engage in an active growth program. And we found that it’s doing exactly the opposite,” said Tedeschi, also a member of Ohio State’s Chronic Brain Injury Discovery Theme.